Every town has stories of its past, and Havenwood Falls is no different. And when the town’s residents include a variety of supernatural creatures, those historical tales often become Legends. These are but two . . .

For eighteen years, Nathan Wade has searched for answers regarding his father’s disappearance. Now, in 1920, he receives a letter from Calla Lily Mircea saying she’s in possession of some of his father’s belongings in a town called Havenwood Falls. Nathan wonders how a field-camera lost on an archeological dig in Egypt could end up in a small town in Colorado, but something draws him in. Nathan takes the leap of faith, only to have his world turned upside down when he finds not only the camera, but a hidden treasure within.

Amani lost everything the day she came of age and her true nature was revealed. Now, having been trapped for eighteen years, her only hope is that someone will save her from the hell she’s had to endure. When a handsome stranger inadvertently releases her, the wait is over, and the truth of her imprisonment comes to light.

Nathan and Amani are now bound to one another and determined to piece together the past. Someone wanted her gone, and she and Nathan race to solve the mystery that connects them both before it’s too late. 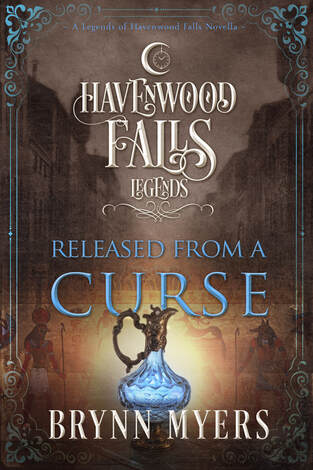 Sequel to Trapped Within a Wish, this novella is the continuation of Amani and Nathan’s story in Havenwood Falls.

Nathan found more than he bargained for when he came to Havenwood Falls in search of his father’s camera, and freeing Amani was only the beginning. Now, they spend time getting to know each other in the town that’s become a safe haven, while awaiting the goddess’s judgment that will determine Amani and her nefarious sister’s fate.

Thoth, the god of wisdom, has been working diligently to find a way to separate the twin djinn females, but Khalida won’t go down without a fight. She knows her time is limited and everyone adores her sister over her, but Khalida has discovered a way to show them another version of Amani––a version that could possibly destroy them all.

Welcome to Havenwood Falls
The Havenwood Falls shared world is a collaborative effort by multiple authors across multiple series all in the paranormal fantasy genre, allowing readers to discover new authors and stories to fall in love with. Each author brings a stand-alone plotline, so they can be read in any order, but there are many crossovers among the stories.
Immerse yourself in the world of Havenwood Falls and stay up-to-date on news and announcements at www.HavenwoodFalls.com Join our reader group, Havenwood Falls Book Club, on Facebook at https://www.facebook.com/groups/HavenwoodFallsBookClub/